“Is this thing *shhhhhzzzt* …rking? Hold on, I think I have to *shhhhhhhzzzzt*”

“Okay. I’m assuming that green light means that this frelling thing is recording, and that I haven’t instead accidentally shunted the “totally going to blow up” status signal from the ships engine to the wrong colored light…again. So, this is Liften “Noodles” Kherry, your humble Executive Officer of the UBS Shameless, coming to you from what’s left of the shuttlecraft “Modesty Blaise”, which has recently escaped the fiery wreck of the Shameless. The good news is that Fleet has assured us they are in the middle of construction of a new, improved Shameless. One with the padded leather seats with the cupholders and the Playboy bunny mudflaps I’ve been pestering the CO for years for.”

“Suffice it to say, the last year has not exactly been a complete triumph for us. It all started to go wrong with a massive ion storm that blew in while we were in port on the sixth moon of Picon, shutting most of the recreation facilities there. Things looked like they were going to turn around a few months later, as our annual bash at the Lensmen Patrol Headquarters looked to be the most successful yet…but it turns out that the Grand Dauphin of the Pakled….whatever the hell kind of Government they have… was staying in the facility next door, and the next thing we know, the Vulcan Temperance Ministry is instituting a Hamster-Level Event raid against us. Not fun.”

“Still, several silver linings: First, we discovered that one of the security officers at Lensmen HQ had stowed aboard, and after beguiling us with his impressive skills, we decided to quickly make him ships Chaplain. Second, self-same Chaplain managed to pull out a treasure map from somewhere, which we decided to follow to the fabled port of Naughty Khan (KHAAAAAAAAAAAN!) We found the warm gentle breezes and friendly natives a significant boost to ships morale.”

“These sorts of stories are circular, of course, so we finally made it back to Picon, this time on it’s seventh moon, where more slack was produced and morale was further elevated. Little did we know, however, as we were pulling out of port, that there was a small…tiny…itsy bitsy defect in the ships warp core, that never got fixed…like…from years back…and…”

“*looks around* Hey…can you keep a secret? The truth is that I accidentally sat on one of those consoles while I was trying to make time with Ms. Adventure. Woops.”

“Anyhow…the Barfleet Department of Hype, Untruth, Malediction and Propaganda is currently deciding whether to completely scrub and revise our ships history. In the meantime, it turns out that the good Padre also happens to be a crack memory core engineer as well as a front line medic, and Pillar of Sobriety. Also, our Recruitment Officer, Mya Complice, happens to be a quarter Ferengi on her Mothers side, and has promised to cook the books appropriately. So I imagine we’ll be up and flying, better than ever, maybe even in time to give the Lensman Grand Ball another try.” 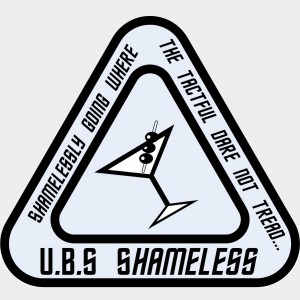