So as many of you know, we had a tiny little shindig at Arisia, and it went okay.

Seriously, it was a personal best. Records were smashed. Those smashed pieces were then further violated (we’re not allowed to say how, in at least 32 states) and chucked out the window. We raised enough money that even after paying off our room bill and making our charitable donation to the ever-worthy Operation Hammond we still have a bit more money than we had right before our long string of bad luck began. Of course, we’ll need to start buying more cups, and other consumables, but the important part is NOW WE CAN AFFORD TO DO SO! Furthermore, there was so much awesome around that we now have to have command staff meeting tonight for the purpose of inventing whole new ways of properly containing it in the future.

A lot of people worked very hard to make it all come together, but we still couldn’t do it without the support of you, our fanbase, and our fabulous sponsors. Thanks for making it all worthwhile, and we’ll see you soon again!!

We’re well underway getting the ship all set for the mission to Lensmen Patrol Headquarters, known to most sentient beings as Arisia. The crew has been working hard to stock the bar with a wide array of the finest ETOH in the fleet, and stocking the cargo bay full of high quality slack. All was going well until someone had the bright idea to rewire the big red “Engage” button that puts the ship into warp to the primary weapon firing controls. Needless to say, we wiped out an entire moon owned by the Vulcan Temperance Ministry. It was a complete utter accident (Yeah that’s right, an accident…yeeeah) and frankly we’re really very, very sorry. *snicker*

Come join us in little more than a week’s time at Arisia on Saturday Night in what we have been referring to as “Mystery Shadow Lounge 3000″. It’s going to be a blast and full of slack, entertainment and plenty of good cheer!

XO’s note: Dying to find out the location? Either track down a helpful Barfleet member, check out our Facebook page, or our Twitter feed.

So the good Padre Xenu (I should just make that his official name: Good Padre Xenu) has come up with a kick-ass fleet banner. 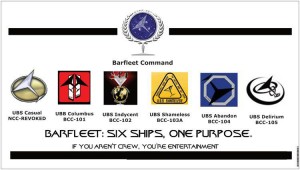 Want to see this baby’s premier? Come and track us down at Arisia on Saturday Night in what I have been referring to as “Mystery Shadow Lounge 3000”. Hope to see you all there, regardless of what new shiny we have to show off…and there is indeed more shiny to show off.